A football trip to Doetinchem 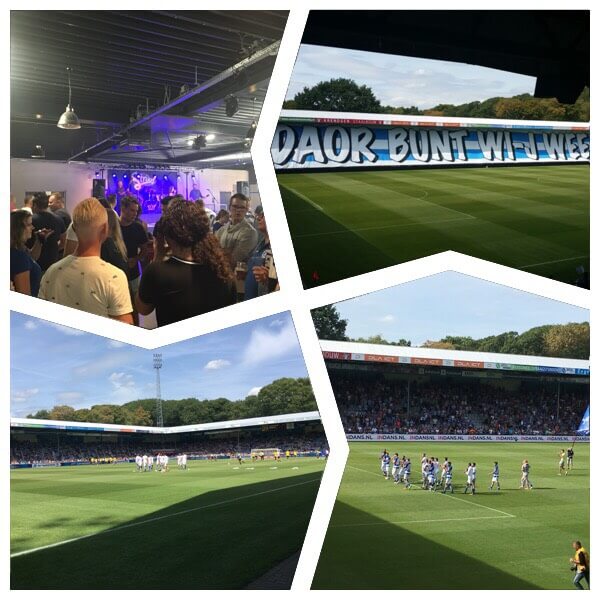 2 weeks before: it is Friday the 27th July 2018, outside are temperatures between 40 degrees celsius and hell. It is noon and I am on the A3 on my way to Doetinchem to the stadium of the Graafschap because I want to pick up the deposited tickets for the match, which should taking place on Sunday the 12th August 2018 against Feyenoord.

The evening before I had written to Ben from the Superboeren that I wanted to come to Doetinchem the next day and so he spontaneously offered me a small "stadium tour".

As soon as I picked up the tickets at the reception, Ben arrived. During the private tour Ben showed me the former meeting place of the Superboeren - the "12e Man", a tiny room below the Spinnekop grandstand with a seat and a small fitted kitchen, which will be used soon as a fan shop, the stadium itself and of course also the canteen.

2 weeks later, on 12-08-2018 it was time. Together with Hans and his friend Uwe, Willi Seitz and Frank Schefels we go to Doetinchem to the Vijverberg Stadium which is about 70 km away. Arriving at the stadium, we first made our way to the canteen. Since you can only pay in the stadium with so-called "Munten", we have exchanged our money for Munten. Afterwards we could collect our first impressions in the canteen. Inside the room a band was playing on a stage, the atmosphere there was relaxed and exuberant. Then I went looking for Ben to introduce him to Hans. Ben tells us the canteen was his idea. His idea was, according to Ben, "If you offer the fans a "high quality" place that you can also earn money with it". His idea really worked: through several events, which have already taken place there, they could earn 100,000 EUR so far. The canteen was financed only by donations from the fans.

Afterwards we made our way to our grandstand, where we already met some more Duisburg fans. As far as sitting in the Netherlands is concerned, it is slightly different from Germany:

The entire stadium is fully seated and - even if the grandstand, the row and the pitch are indicated on the ticket - you can simply sit down in the stand where you like. The only exception is when a name is noted on the seat. This is then the place of a season ticket holder.

Although our stand was right next to that of the fans of Feyenoord and the game was considered as a "high-risk game" (high-risk games always take place on Sundays in the Netherlands), it was peaceful all the time. I also find it worth mentioning that the fan choreos of the Graafschap are pulled up by cable pulls that are mounted under the stadium roof.

I don't think there's much to say about the game, except that the Dutch Zebras won 2-0 against Feyenoord.

Since the demand for upcoming home games arose after the game, here are some dates:

(I already bought a ticket for this game)

On my short trip to Doetinchem on 27th July Ben gave me some issues of the fanclub magazine "D'ran!" from SV Superboeren as well as a key fob. If you are interested in one of these magazines or the key fob, please contact me.