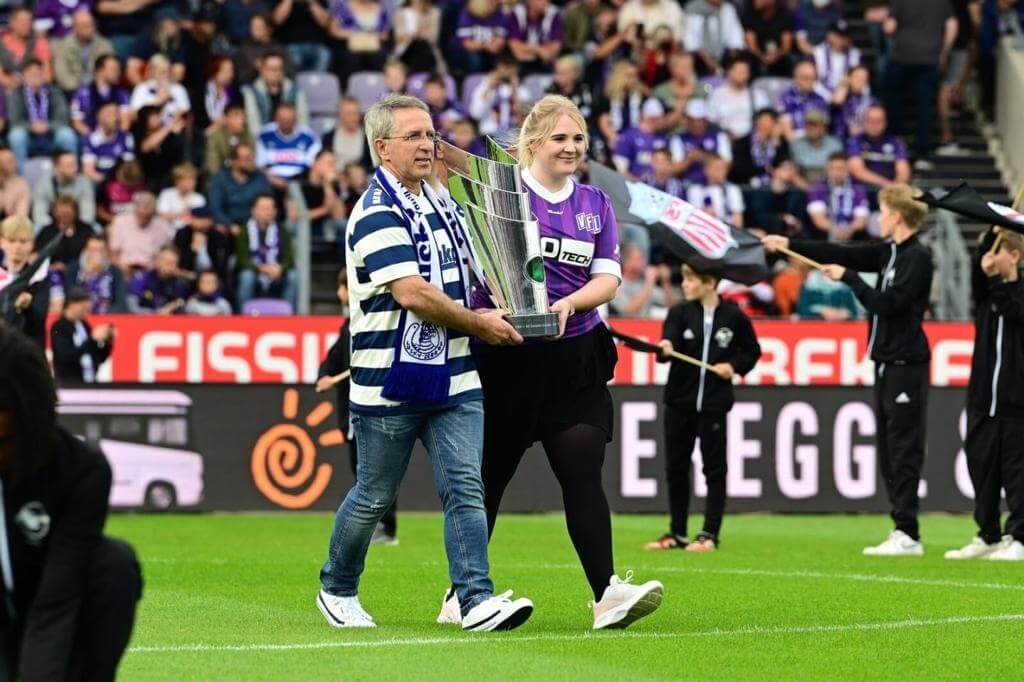 It was the 9th July at 09.20 am when our fan representative Christian Dorscheid called me.

At first, I thought he wanted to find out whether the shirts for Cuba that he had given me

about two weeks before had arrived on the island

But he wanted something else. The start of the season was on his agenda and he had
chosen me to ask if I would like be part of an activity in the stadium. He said he needed
someone for an activity in the stadium who wouldn’t immediately mob the opposite football
fans. Maybe the ball would be carried into the stadium by fans and he asked me if I would do
that. I agreed without hesitation. He said that some things still had to be clarified and that he
would contact me again.
Well, on 13th July he informed me that the activity will take place but that it will not be the ball
rather the 3rd divison cup which I should carry into the stadium with an fan of Osnabrück.
The precise procedure would be agreed on beforehand.
On 21st July we agreed the procedure and arranged to meet at the visitors‘ entrance in
Osnabrück. There Christian accompanied me into the stadium and introduced me to the fan
representative of Osnabrück. He told me I should go the middle of the grandstand where a
colleague in a white shirt would be waiting for me, whom I could also see from afar. Then I
was greeted briefly and introduced to Christin Stumpe from the „Lila-Weißen Wölfe“. We had
a nice conversation and she asked me to carry the cup a little bit more, althout it wasn’t really
heavy, because she was in her 4th month of pregnancy. Photos were taken from many sides
and so the time went by quickly. Then the moment came when the main programme started
and the two of us made our way across the field to present the cup to the fans. I didn’t think
about the fact that at that moment we were also being presented to the viewers and fans on
TV. I said to Christin: „Did you see that we are on the scoreboard?“ At the end of our way
there was a podium where we put the cup down and more photographers took pictures. Then
we walked through the inner area to our seats in the stands. I sent greetings to our
substitutes who has already taken their seats on the bench.
All in all, it made me very proud to be part of this activity and to represent our fanclub
because on the back of my shirt you can read Lucky-Zebras 97, of course. Later, I contacted
Christin to exchange photos and to send her a fan scarf and a few other things.
With blue and white striped greetings,
Hannes