Measures to unite nations - or: A scarf for the new canteen 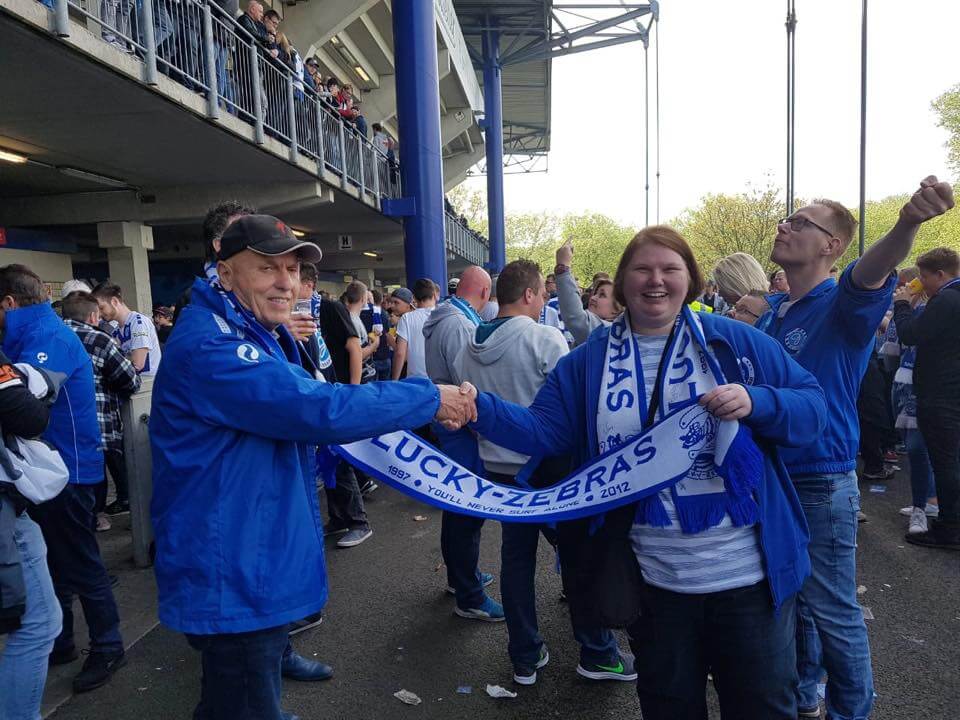 Since the visit of the Dutch zebras on 15.03.2012 at the match against the VfL Bochum, I have been following these and also the matches of the BV De Graafschap, although admittedly irregularly, due to the many parallels: the mascot is a zebra, the club colors are white-blue and the team and the club have experienced like us a lot of ups and downs.

SV Superboeren De Graafschap is the largest fan club of BV De Graafschap with around 1,600 members. I recently saw the post on Facebook, where the SV Superboeren was looking for scarves from as many different clubs as possible for the new canteen. The canteen, also called "Supportershome" of SV Superboeren, is located on the side of the stadium under the Spinnekop stand and is a meeting point for all fans of the Graafschap. Over a longer period, the location has been extensively renovated so that it is now larger, more modern and multifunctional.

And since zebras help of course zebras, I wanted to give them one of our fan club scarves for the new canteen. Immediately, I tried to contact the SV Superboeren. Unfortunately, it is not possible for me to go to Dotinchem for a match because I am not a member of the Graafschap. In this context the fanclub Super Zebras came to my mind because they have a fan friendship to the Dutch zebras and also visit the matches regularly. My idea: they could simply take our scarf with them on their next visit. Christian Schreiber, member oft he committee of the Super Zebras, suggested instead that we could simply hand over the scarf ourselves.

No sooner said than done. Yesterday's match day against Jahn Regensburg was the day. Our Dutch friends were visiting us in the stadium and I planned the handover of the scarf at short notice. Before the game started, I was there to greet the Dutch zebras and let them know of my spontaneous action.

In the half-time we (Ben, from the Superboeren, Sabine and I) met then before stand I handed over and the scarf. Afterwards we had a great conversation despite language barriers during the half-time.Ben told us, among other things, that every match of the Graafschap is basically a party. Live bands perform around the stadium before, during and after the match, inviting fans to celebrate. Ben also told us that the clubs were thinking about friendly matches between MSV Duisburg and BV De Graafschap and invited us to visit the matches of the Graafschap. I have decided to accept the invitation in any case in the next season and then make myself a picture.